I only consider myself a morning person, or someone who gladly and willfully awakes early, on two occasions: when heading off to the airport for travel or when I am in the wilderness. Feynan Ecolodge falls under the latter of the two and last week I was up early preparing to explore new routes for hikes. Believe me, it is easy to get up early when the view out your window is so inspiring and all that untamed nature is begging to be explored. As I left my room and met Nabil Tarazi, our Managing Director at EcoHotels, out front, the sounds from Bedouin tents in the distance–goats bleating and roosters crowing on the dawn set the stage for the beginning of the new hike we were to explore.

As we left Feynan, Nabil pointed to the mountain we would scale, “That green one there, no behind that one, the taller one.” I was going to need to stretch. We set off up a gentle slope just to the east of the lodge. Finding a Bedouin shepherds’ path we gradually began zig-zagging up the hills that lead to the Shara’a mountain range that separates Shobak, Petra and Dana Village from the desert plains of Wadi Araba. I  wondered just how long this had been a path and how many people over the 12,000 years Feynan has been inhabited for had walked the same route. Suddenly I became aware of the altitude gained, looking back, the lodge was much lower than us and sheer falls to either side began to form. I stopped often to peek over the edge and gaze into the wadis below the steep banks. A gnarled tree grew out of the banks just above the wadi’s shaded floor and shallow caves lined the cliff walls. 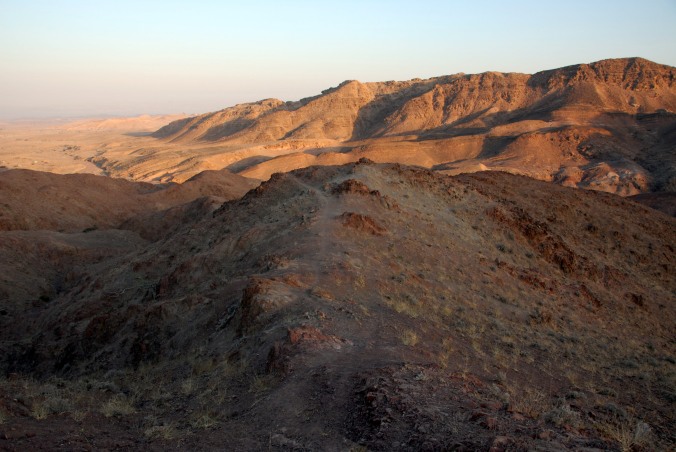 Now we were exploring, and the fresh air, new sights and chirping birds woke me up better than morning coffee back at home ever does. It was already light out, and rays of sun were escaping over the eastern ridges and lighting up the valley below in shades of orange and bright rust. It was a good thing I was awake, because now these  shepherds’ paths started to become serious. I saw Nabil 10 paces ahead cross the top of a ravine and turn right around a tall promontory of rock mass. To the left the slope gave way exposing a cliff around a hundred meters tall. I followed and found my feet tracing the very ridge line of the mountainous hill we had climbed. The view was inspiring and we could begin to see the villages of Greigra and Rashaydeh to the south. To the east, the mountain-hills we had climbed were giving way to real peaks, in different shades of greens, browns and tans.

One more climb stood before us and we’d reach the top of our green little mountain. An ill-advised sprinting/scrambling contest began which left no clear winner and two very out-of-shape participants gasping for breath at the top of the final hill. The view was magnificent in those early morning hours and I quickly forgot about my own panting. I could see the entire 9 km stretch of dirt road linking Feynan to the world, beyond that villages and beyond those villages the dunes of Wadi Araba-perhaps even Palestine. Adjusting my focus down below, I could make out the archaeological ruins of the people who once lived at Feynan: Neolithic ruins and graves, a Roman aqueduct and the remnants of a Byzantine town. 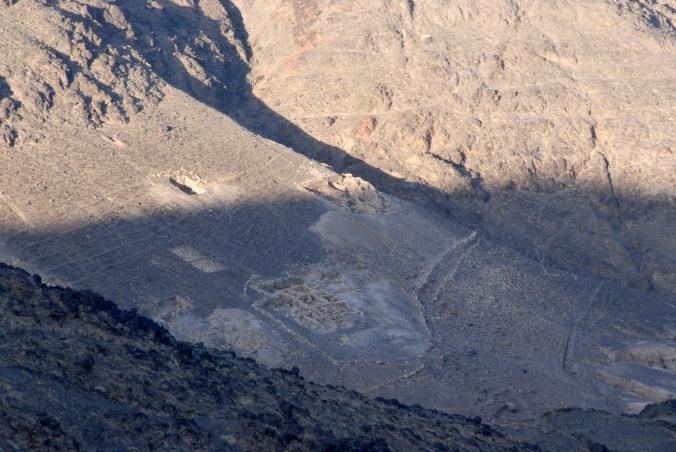 Beginning our descent along a different route, we engaged some sections that required turning around and facing the rock to lower oneself down carefully. It was nothing too advanced in terms of climbing, but an area to definitely be mindful in. After negotiating the steep of it, we were back on shepherds’ paths, probably often used by the family members of Abu Khalil, whose summer and winter tent areas we had just circumnavigated. On the last flat foothill, before intersecting the road to the lodge, we witnessed the community fully awake as well. Bedouin women were walking with baskets perched atop heads in the distance, a child mounted on a donkey going off somewhere and hundreds of goats scurrying off to find water.

The new Sunrise Hike will begin being offered this fall. Recommendations are welcome for a name. Suggestions thus far include the Abu Khalil Sunrise Trek, Exhilarating Sunrise Trail or Ridgeline Dawn Hike. The guided hike takes around 2.5 hours to complete and will be an inspirational start to adventure filled days at Feynan Ecolodge. For reservations or more information, please visit Feynan.com.